Handwriting practice is the bane of my existence. I have a five-year-old who reads well beyond grade level. However, getting him to practice his handwriting is like pulling teeth.

Traditional methods of practicing handwriting have proved futile. Workbooks don’t hold his interest, so I’ve had to invent numerous handwriting games to hold his attention. It’s such a struggle that I have not been diligent about sitting down with him to practice.

Recently, I heard Katie Davis’s interview with comic book author/illustrator Stephen McCraine. McCraine recounted making his first book at age sixish. He drew the pictures, and his mom filled in the speech bubbles — except for his name, which Stephen could write himself. The interview sparked an idea. Surely writing a book was something I could try with Cooper, my five-year-old, as a means of handwriting practice.

So this morning I grabbed two sheets of paper for each “book.” I folded them in half and stapled them in the crease, creating 8 pages, including the covers, for each book. I asked Cooper and Finley to brainstorm some ideas. Finley, age three,  opted to write a story that Cooper had just made up: their stuffed bear, Winnie, finding a lost library book under the couch. (Note: The bear was on the right track. I found the missing book behind a couch cushion. Thanks Winnie!) 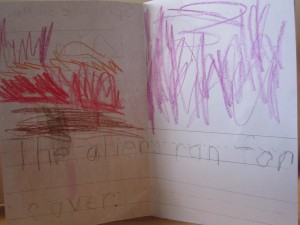 Cooper wrote a book based upon an animation he’d seen: Springtime on Mars. He drew the pictures and dictated the text: “Watch out! The aliens ran for cover.” I lightly traced the letters and had him write them, following my pencil strokes. We completed the cover and a two-page spread. Cooper was very proud of his first book. I’m hoping we can add a page or two in the days to come.

Kirsten W. Larson used to work with rocket scientists at NASA. Now she writes books for curious kids. She’s the author of WOOD, WIRE, WINGS: Emma Lilian Todd Invents an Airplane, illustrated by Tracy Subisak (Calkins Creek, 2020), A TRUE WONDER: The Comic Book Her Who Changed Everything, illustrated by Katy Wu (Clarion, 2021); THE FIRE OF STARS: The Life and Brilliance of the Woman Who Discovered What Stars are Made of, illustrated by Katherine Roy (Chronicle, 2023), and THE LIGHT OF RESISTANCE, illustrated by Barbara McClintock (Roaring Brook, 2023) along with 25 other nonfiction books for kids. She's a geek, LEGO lover, and sock enthusiast. Find her at kirsten-w-larson.com or on Twitter/Instagram @KirstenWLarson. View all posts by Kirsten W. Larson

Somebody is in her favorite napping spot. #authorlife
Congrats to all the @Soaring20sPB ALA Youth Media Award Winners: @rajanilarocca (Newbery honor), @susanhkusel (Sydney Taylor PB winner), @ColleenPaeff (Sibert honor). #ALAyma #alayma22 @soaring20spb
What will you do this year to improve your craft and creativity? In my latest blog post, I share my top 5 Writer Strategies for Welcoming 2022, including celebrating successes and lots of reading. Hop on over to my website and look under "Press and Newsletter" to find my blog.
In honor of Betty White’s 100th: Stay golden, friends. And big thanks to my buddy Liz for this beautiful cross stitch. #bettywhite
All good writing starts with extensive reading. This is my current TBR. Guess what I’m up to today? #amwriting #nonfiction #12x12pb
Sent a #picturebook draft to my agent and rewarded myself with Wordle. So that's a "ReWordle" or "ReWardle."