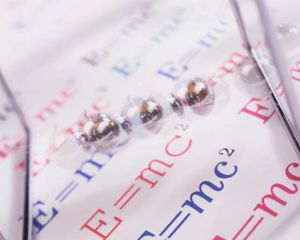 NOTE: Much of this information is taken from Jason Haas’s biography for kids, which is referenced below.

If Albert Einstein were alive, the father of the theory of relativity would be 133 today. Was Einstein one of the most brilliant theoretical physicists of all time? Yes. Did he change the way we think about our universe? Yes. But it’s Einstein’s boundless curiosity that makes him, in my opinion, one of the coolest people ever to walk the planet.

Here’s one of my favorite Einstein quotes:

“When searching for a needle in a haystack, other people quit when they find the needle. I look for what other needles might be in the haystack.” — Einstein

Einstein’s interest in science began when he was very young. His father and uncle installed electrical equipment, and Einstein found the “magic” of electricity fascinating. At age five, Einstein’s father gave the young boy a compass to play with when he was sick. Einstein’s father explained the Earth’s magnetic field. Some say this was when Einstein knew he wanted to learn the mysteries of the universe.

Einstein and traditional German schooling — with its rote memorization and drilling — didn’t mix. He often got into trouble for daydreaming in class when he was bored. At age 10, he started homeschooling himself, reading everything about science that he could. A college student who lived with the family introduced Einstein to Euclid, Darwin and Kant among others.

Einstein eventually returned to school to finish his degree and was admitted to the university. There, he also failed to shine, skipping classes and passing courses only because his friends lent him their notes. So, when Einstein published his theory of relativity, he wasn’t a physics professor. Instead, he was a 26-year-old patent clerk.

As a parent, Einstein’s story causes conflict. I want my children to model Einstein’s insatiable curiosity. However, I don’t want them to follow in Einstein’s footsteps when it comes to the school environment. I think the takeaway is that curiosity — and intelligence — cannot always be measured by how well one does in school. And one can achieve a rich and fulfilling life in many different ways.

If you and your children would like to learn more about Einstein, here are some good resources:

Kirsten W. Larson used to work with rocket scientists at NASA. Now she writes books for curious kids. She’s the author of WOOD, WIRE, WINGS: Emma Lilian Todd Invents an Airplane, illustrated by Tracy Subisak (Calkins Creek, February 2020), A TRUE WONDER: The Superhero Who Changed Everything, illustrated by Katy Wu (Clarion, 2021); and THE FIRE OF STARS: The Life and Brilliance of the Woman Who Discovered What Stars are Made of, illustrated by Katherine Roy (Chronicle, 2022), along with 25 other nonfiction books for kids. She's a geek, LEGO lover, and sock enthusiast. Find her at kirsten-w-larson.com or on Twitter/Instagram @KirstenWLarson. View all posts by Kirsten W. Larson