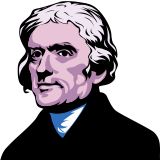 As a University of Virginia alum and former research intern at Monticello, I have a soft spot for Thomas Jefferson. All right, that’s probably an understatement. Most of us who went to “The University” pretty much revere the man, who founded the school. Creating the University and its academical village was one of Jefferson’s greatest accomplishments. Here’s what he had engraved on his grave marker:

“Here was buried Thomas Jefferson, Author of the Declaration of American Independence of the Statute of Virginia for Religious Freedom and Father of the University of Virginia.” (You’ll notice that he omitted his two-term presidency as one of his key accomplishments.)

At his heart, Jefferson was a scholar, a lifelong learner. He was a Renaissance man who was passionate about farming, architecture, applied science and math. His personal library formed the nucleus of the Library of Congress’s collection. And he designed his university so that professors lived alongside students providing endless opportunities for interaction and discussion outside of the classroom.

We celebrate Jefferson’s birthday on April 13th. In honor of what would be his 269th birthday, here are a few resources for children.

Kirsten W. Larson used to work with rocket scientists at NASA. Now she writes books for curious kids. She’s the author of WOOD, WIRE, WINGS: Emma Lilian Todd Invents an Airplane, illustrated by Tracy Subisak (Calkins Creek, February 2020), A TRUE WONDER: The Comic Book Her Who Changed Everything, illustrated by Katy Wu (Clarion, 2021); and THE FIRE OF STARS: The Life and Brilliance of the Woman Who Discovered What Stars are Made of, illustrated by Katherine Roy (Chronicle, 2022), along with 25 other nonfiction books for kids. She's a geek, LEGO lover, and sock enthusiast. Find her at kirsten-w-larson.com or on Twitter/Instagram @KirstenWLarson. View all posts by Kirsten W. Larson

My new coffee mug: “I’m not saying I’m Wonder Woman. I’m just saying nobody has ever seen me & Wonder Woman in a room together.” #wonderwoman @thewildkat @clarionbooks @onceuponatimebkstore @soaring20spb
Look at this card! Part of the fun of A TRUE WONDER’s upcoming #bookbirthday is all the #wonderwoman related gifts friends are showering me with.
It’s #nationalcomicbookday, and I have a #booklist of 9 books to celebrate comic creators. @soaring20spb @clarionbooks @thewildkat #wonderwoman
Posted @withregram • @artemisroehrig While you wait for new STEM Women in KidLit episodes, check out our interviews with these amazing women! https://stemwomenkidlit.buzzsprout.com/ @lauriewallmark @DowPhumiruk @AuthorLauraGehl @gaildvillanueva @LE_Carmichael @KirstenWLarson @doctheagrif @saralevinebooks @stacymcanulty @rajanilarocca #womeninstem #womeninstemwednesday #womeninsteam #womeninengineering #womeninneuroscience #12x12pb #scbwi #kidlitart #sciencepodcast #womenincomputerscience #veterinarian #nasa #computerengineering #computerscience #mechanicalengineering
My meditation app, @smilingmind, tells me it’s #worldgratitudeday. At dinner, we each share something we are grateful for. Do you have a gratitude practice?
Found the coolest card at Trader Joe’s today. Of course, I had to buy it. #superheroes #wonderwoman