Frequent readers of this blog know about Finley’s love affair with Egyptian mummies. Ever since he saw his first mummy at the Getty Villa, he’s been obsessed. So, when it came time to celebrate his 4th birthday, we opted for an Egyptian mummy party.

He took these mummy cupcakes to school. We spread a thin layer of icing on the cupcakes, and then used a flat tip to apply the bandages. The eyes were mini M&Ms dotted with food-safe decorator markers. 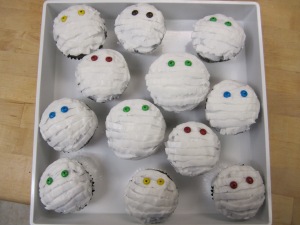 Because I couldn’t find a lot of Egyptian decorations, I used my newly acquired Silhouette to print and cut the gift bags and banner. Most of the artwork came from PhillipMartin.com, which has some adorable clip art. My mom used an online hieroglyphics translator to find out what the kids’ names would be in Egyptian. The gift bags included mummy pretzel sticks made from drizzled white chocolate and M&M eyes, as well as an Egyptian activity book and bookmark from Amazon.

We planned three games. The first was a chariot race. My mom made a pharaoh costume for Spider Man. He rode in the “chariot,” which was the trailer for our wagon outfitted with a harness (thanks to my husband and mom). We timed each child as he ran the course, with the fastest child winning. There was a catch — if King TutanSpidey fell out, the child had to stop and put him back in.

Just for fun, we let the children take turns wrapping each other with toilet paper to make mummies. 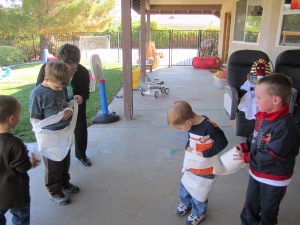 Finally, I downloaded The Bangles’ “Walk Like an Egyptian” for a modified version of musical chairs. Instead of chairs, I printed out Egyptian clip art and glued it to card stock. The children had to scramble for squares instead of chairs. Those who were “out” got to walk like an Egyptian on the sidelines.

For the cake, we baked a sheet cake and covered it with icing and graham cracker “sand.” We cut graham crackers to make pyramids and then added a Nile river. We used LEGO Pharaoh’s Quest figures for decoration.

The birthday was a success!

Kirsten W. Larson used to work with rocket scientists at NASA. Now she writes books for curious kids. She’s the author of WOOD, WIRE, WINGS: Emma Lilian Todd Invents an Airplane, illustrated by Tracy Subisak (Calkins Creek, February 2020), A TRUE WONDER: The Superhero Who Changed Everything, illustrated by Katy Wu (Clarion, 2021); and THE FIRE OF STARS: The Life and Brilliance of the Woman Who Discovered What Stars are Made of, illustrated by Katherine Roy (Chronicle, 2022), along with 25 other nonfiction books for kids. She's a geek, LEGO lover, and sock enthusiast. Find her at kirsten-w-larson.com or on Twitter/Instagram @KirstenWLarson. View all posts by Kirsten W. Larson