We finally made it to the California Science Center to view Space Shuttle Endeavour, the youngest in the Space Shuttle fleet. The boys were sick when Nils signed autographs at the Science Center Halloween weekend, when the exhibit first opened. Nils flew one of the aircraft that chased Endeavour and the 747 on its trip to LAX in September. He carried a NASA flight photographer in his back seat.

On a rainy Saturday morning, the Science Center was crowded. Endeavour was doing its job of drawing people into the museum, which made me happy. We are frequent visitors, and I’ve never seen the place so packed.

To see Endeavour, you must obtain free, timed tickets. You can get these at the museum, though you risk them selling out, or you can print them at home or a $2 per ticket fee. When we arrived at 10 a.m., the only available tickets were for 3 p.m. Because the Science Center itself is free, it’s well worth it to print your tickets at home.

Your ticket admits you first to the “California Story” exhibit, which details the Shuttle’s birth in Palmdale, California. Viewers can touch the tires Endeavour used on its last flight. They can see a real space potty and kitchen and watch videos about how they work. These two topics are always a hit with kids, and astronauts will tell you they probably answer questions about eating and going to the potty in space most often.

There is also a mock-up of Rocketdyne’s operation support facility, which looks a lot like mission control. There you can watch and hear a launch on the screens.

For me, the time-lapse video showing Endeavour’s flight into Los Angeles and 48-hour trip through town to the museum was a highlight. The number of people who turned out for this historic event is overpowering. The video also highlights the contrast between this one-of-a-kind asset and the everyday of Los Angeles with views of Endeavour through a laundromat window, shots of it driving through streets lined with houses and , images outside a donut shop.

From the exhibit, you head to the Samuel Oschin Pavilion, a temporary home for Endeavour until a new building is built. Many years ago I saw Space Shuttle Atlantis in major modifications at Palmdale, and I’m not sure I’ve ever been so close. Visitors can almost touch the heat-resistant tiles. The Pavilion also is home to SPACEHAB, which the Shuttles carried to provide extra space to live and work, as well as a Space Shuttle main engine. There are video clips highlighting Endeavour’s missions. The outside wall provides details about each Space Shuttle mission.

You can stay in the exhibit as long as you like. If you can, go earlier in the day, because the line backs up and the exhibit gets crowded as the day moves on. And while you are there, don’t miss the EcoSystems exhibit and all the children’s discovery rooms. 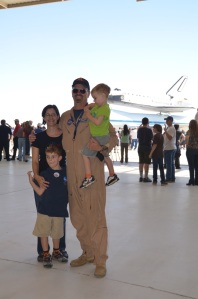 Space Shuttle Endeavour came home to California today, and we were able to join the festivities. Endeavour, like all the orbiters, was born in Palmdale, California. Endeavour is the “baby” of the now-retired fleet, first flying 20 years ago.

One of NASA’s specially modified 747 airliners gave Endeavour a high-speed piggyback. Amazingly, only 7 bolts hold the orbiter to the airliner. On Friday the 747 will fly Endeavour to Los Angeles International Airport (LAX) where it will stay until mid October. At that point it will be towed through the streets of LA to its final home at the California Science Center.

This weekend we took the Curious Kids to the California Science Center for the traveling Cleopatra exhibition. Although there were no mummies, the show was still a big hit, primarily because Finley got a King Tut crown.

The exhibit boasts the largest collection of artifacts from the Cleopatra era ever assembled in the U.S. Many of the pieces were recovered from the sea near Alexandria, Cleopatra’s capital city. Over hundreds of years the temples and treasures washed out to sea, a result of earthquakes, a tsunami and other natural forces. Underwater archaeology teams, led by Franck Goddio, have only discovered the ruins in the last couple of decades.

Another major portion of the exhibit discusses the search for Cleopatra’s tomb led by archaeologist Zahi Hawass. Hawass and his team now believe Cleopatra and Mark Antony may be buried in the temple of Taposiris Magna west of Alexandria. His team has not yet recovered a mummy.

If you are in the Southern California area, the exhibit runs through Dec. 31st. It’s a wonderful opportunity to inspire a budding archaeologist.

You can learn more about Cleopatra, ancient Alexandria and the temple:

First a big thank you to two fantastic bloggers who shared some sunshine with me this weekend. Check out Vivian Kirkfield at Positive Parent Participation and Jarmila Victoria Del Boccio at Making the Write Connections. These two ladies were gracious enough to pass on the Sunshine Award.

Here’s what makes me happy: hundreds of preschoolers, toddlers and their parents squealing with delight, dancing in their seats and screaming like crazy for….Sid the Science Kid. Never heard of Sid? Imagine animated, childlike Muppets conducting hands-on science investigations and encouraging kids to investigate, explore and discover. That’s Sid, a creation of The Jim Henson Company, which airs on PBS.

My children have enjoyed the show for a couple of years now. So, when PBS SoCal hosted “Little Scientist Day” featuring Sid at the California Science Center, I snapped up tickets. We enjoyed “real-live” Sid singing songs from the show and had a sneak peek at a yet-to-be-aired Easter episode about rocks. The museum also had a number of investigations set up throughout. We made slime out of polyvinyl alcohol and sodium borate. You can to the same thing at home with school glue and borax (scroll to the bottom of that post for directions for making “alien goop.”)

As a parent of budding scientists, I love the Sid show. Each episode includes a real science investigation that you can replicate at home from instructions on the PBS Parents site. We’ve made applesauce to discuss irreversible change, bounced balls to explore elasticity and much more. Each activity includes learning objectives, a materials list and step-by-step procedures.

Parents and teachers also can follow the two Sid-related blogs for more activity ideas and ways to implement the investigations at home and school.:

Let’s face it, children are natural scientists. Early introduction to hands-on investigations plays into their natural curiosity and can instill a life-long passion for science.

We recently took in a fascinating exhibit called 1001 Inventions at the California Science Center (on view through March 11th). The exhibit chronicled scientific contributions of the Muslim world during the Middle Ages, including the first University, founded by a Muslim woman, and the first man to fly.

The interactive exhibit captured the children’s attention. Cooper spent time exploring lunar formations named for Muslim astronomers. He also identified constellations  in a mock night sky. We learned why we write our numbers the way we do through an interactive game. (Essentially, the number 1 has one angle; 2 has two angles and so on.)

I’m not sure where the exhibit will travel to next, but there are plenty of resources available on the Web site for those who would like to explore its content. For children ages 11 – 16 there is a teacher kit available online, complete with experiments.

The exhibit highlights several learned Muslims from the Middle Ages. Here are a couple that captivated us.:

Fatima al-Fihri: This well-to-do Muslim woman founded the first university in 841 BCE. When her father died, she used her inheritance to build Al-Qarawiyin in Fez, Morocco, her hometown. Students there studied religion, politics and natural sciences. The University still operates today.

In the 9th Century, Abbas ibn Firnas made the first-ever human flight in an early hang glider. He jumped from a tower in Cordoba, Spain, flew successfully and landed with only minor injuries.

The exhibit makes the case that Muslim advancements during the “Dark Ages” led to the Renaissance in Europe. It was certainly a fascinating history lesson.

We have a running joke in our town: while we live in the middle of nowhere, we can be anywhere in an hour and a half — the beach, the mountains and a major city. That certainly holds true for museums and cultural institutions, including one of our favorites: the California Science Center. Since the science center is far from next door, we only make it there every few months, but each trip is a special treat.

Science centers make science fun through hands-on activities and exhibits. This is the type of science I remember from elementary school. While we’ve done our fair share of science experiments at home, there’s nothing like science kids can touch done on a large-scale (and backed by big bucks). Want to learn which materials are good insulators? Check out the giant ice wall in the polar ecosystem exhibit, where you can cover your hands in different materials and judge for yourself. Do you want to learn about solar power? Use a joystick to control a light that mimics the sun; when you shine it on a small car’s solar panels, the car races around the track!

I’m always heartened by the number of school groups and families we see at the science center. Here are kids learning that being a scientist can be fun. To find a science center near you, click……here.

Click here to receive classroom activities, nonfiction writing tips, upcoming events, and giveaways straight to your inbox (once a month). BONUS: When you sign up today, you'll receive access to a FREE mentor text record sheet, perfect for authors of all ages looking to hone their craft.

I'm celebrating four days until launch of THE FIRE OF STARS, illus @KatherineRoyStudio from @chroniclekidsbooks with these Teaching Tips. This mini discussion guide encourages students to understand how scientists work and explore scientific inquiry. Download at: https://kirsten-w-larson.com/the-fire-of-stars/
My #wrad recommendations. I like to leave students with book suggestions at the end of every session. #worldreadaloudday #kidslovenonfiction
Ready for World Read Aloud Day 2023! I’m giving students at 8 schools in 7 states a sneak peek of THE FIRE OF STARS, which is out next Tuesday! @katherineroystudio @chroniclekidsbooks @onceuponatimebkstore @soaring20spb #wrad #worldreadaloudday @litworld
It's a third star for Cecilia! —THREE starred reviews for our book in a row!! ⭐️⭐️⭐️ @sljournal says: “A stellar subject, breathtaking artwork, and unique layout set this biography for young readers apart from the rest.” Thank you so much to Amy Fellows for this perceptive review. One week until our book is out in the world! There’s still time to preorder at https://kirsten-w-larson.com/the-fire-of-stars/ with @onceuponatimebkstore, my local indie, to get a signed, personalized copy along with a 5x7 print, while supplies last. Hooray for another stellar review!
Thanks to the amazing @matthewcwinner for this insightful review!