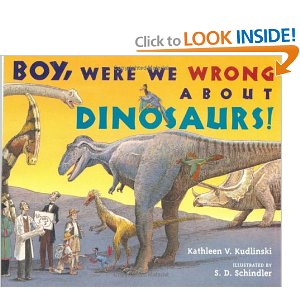 Children’s nonfiction is hands-down my favorite genre. It wasn’t until my eldest son became obsessed with dinosaurs that I truly appreciated a well-written nonfiction picture book. Kathleen Kudlinkski’s “Boy, Were We Wrong About Dinosaurs” (grades 2-4) is a perfect example of how enjoyable and informative nonfiction can be.

“Long, long ago, before people knew anything about dinosaurs, giant bones were found in China. Wise men who saw the bones tried to guess what sort of enormous animal they could have come from.

After they studied the fossil bones, the ancient Chinese decided that they came from dragons. They thought these dragons must have been magic dragons to be so large. And they believed that dragons could still be alive. Boy, were they wrong!”

“Boy, were they wrong,” is Kudlinski’s constant refrain. For me, the most exciting part of this book was learning just how many old theories about dinosaurs scientists have proved wrong. Think dinosaurs are reptiles? No way! Scientists now think dinosaurs’ body temperatures were pretty close to ours — about 98 degrees.

For the first time, I learned that today’s birds are considered “living dinosaurs.” Who knew? (This theory’s been around since the early 1970s, though I didn’t learn about it growing up).

This book’s greatest contribution is showing children that new knowledge is created every day. Scientists do the best they can with the information they have. But, as new discoveries are made, knowledge changes. My sons and I now have a fun time reading older books about dinosaurs and pointing out theories that are now considered outdated.