Here is the AP’s headline, which I wish I had written:

In less than four days, NASA’s mini-Cooper-sized Mars rover will land on Mars (finger’s crossed). This is no small feat: about half of all missions to the Red Planet have failed. Plus, NASA is using a new “sky crane” landing technology rather than letting the rover bounce or parachute to a landing. So, yes, I’m holding my breath and sitting on pins and needles. It’s the same feeling I’ve had all week watching the U.S. Olympic team.

Curiosity has several advantages over rovers past. It will run on nuclear instead of solar power, meaning it can keep on trucking during Martian winter. It’s wheels are much beefier than those of Sojourner and Spirit and Opportunity, allowing the rover to drive over rocks 29 inches high and travel 656 feet per day. Curiosity is a chemist and geologist in one, with the most sophisticated instruments to date. It can gobble up samples and analyze them in its internal laboratory. Over the course of the mission, Curiosity will study the role of water on Mars, atmospheric evolution and climate.

Here are some resources for sharing this historic moment with your curious kids.

Will you watch the landing? Will you tune in with your kids?

We recently took a field trip to the Jet Propulsion Laboratory to visit the Mars rover test yard. As some of you may recall, my eldest, Cooper, was obsessed with the latest Mars rover, Curiosity, for at least a third of 2011. (NOTE: Curiosity lands on the Red Planet August 5th — 6 months from yesterday.)

The rover test yard is a simulated martian surface composed of dirt, large rocks and hills. The yard houses Curiosity’s “twin,” a second rover almost exactly like Curiosity. Scientists can test out techniques and fix problems using the test rover before trying things out on Mars. While we were there, we saw how Curiosity will use the sun to orient itself on Mars. Cooper also got to “drive” the rover. After commands were punched into the computer, our eager five-year-old got to hit the enter key. One of the most amazing things about the rover was the sound it makes while it moves. It sounds exactly like someone crushing aluminum cans.

During our trip, we visited one of the labs and toured the JPL museum, which chronicles every JPL mission to date. We ran into several groups of schoolchildren and boy scouts. It was a cool place!

To learn more about the Curiosity mission, see the JPL Web site. On Youtube, JPL has a great series, called Building Curiosity ,about all the new rover technologies.

In other news, writer extraordinaire Beth Stilborn granted me the coveted Kreativ Blogger award. It’s almost like getting a Pulitzer. (Hey, I said almost). So, “thanks Beth!” As part of the award, I get to introduce you to six fantastic bloggers and tell you 10 things about myself. First, the bloggers who shall receive the Kreativ Blogger Award are:

Check out these great blogs, please!

Now, 10 quick things about me:

May your holidays be filled with joy, wonder and, of course, curiosity (ornament by Aerosquirrel on Etsy.com)!

My eldest son had an unusual request for Halloween this year: he wants to be the Curiosity Mars Rover, which is currently scheduled to blast off for the red planet on Nov. 25th. He’s been obsessed with Mars and Curiosity since this summer, so I felt compelled to oblige him.

Curiosity’s goal is to figure out whether life can survive on Mars. Unlike rovers past, Curiosity is nuclear, rather than solar powered, meaning it won’t have to hibernate during the Martian winter. It has a sophisticated internal laboratory where it can analyze rock samples it’s “gobbled up.” Overall, the mission uses a lot of cool, new technologies thanks to all those rocket scientists at NASA’s Jet Propulsion Laboratory. 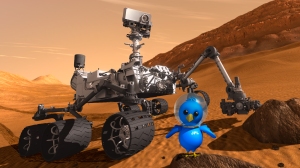 Building Cooper’s costume out of an assortment of boxes, wrapping paper tubes, aluminum foil, brads and wire has been quite the endeavor. After a couple of test runs at various Halloween parties, I can sympathize with the folks at JPL. My costume need only survive a walk around the block (a test it failed miserably); JPL is  trying to build something that can withstand the vibrations of launch, the challenges of landing and life on a distant planet.

Oh well, it’s back to the drawing board before we hit the candy trail tonight! My only regret is that I didn’t contact JPL for Curiosity press materials that we could hand out while trick or treating. I’m sure we’ll get a lot of questions about the costume.

If you want to learn more about Curiosity, JPL has a great series of YouTube videos dubbed, “Building Curiosity.” Each clip covers new technologies (landing system, robotic arm, and wheels for example) and tests as Curiosity prepares for launch.

Click here to receive classroom activities, nonfiction writing tips, upcoming events, and giveaways straight to your inbox (once a month). BONUS: When you sign up today, you'll receive access to a FREE mentor text record sheet, perfect for authors of all ages looking to hone their craft.

I'm celebrating four days until launch of THE FIRE OF STARS, illus @KatherineRoyStudio from @chroniclekidsbooks with these Teaching Tips. This mini discussion guide encourages students to understand how scientists work and explore scientific inquiry. Download at: https://kirsten-w-larson.com/the-fire-of-stars/
My #wrad recommendations. I like to leave students with book suggestions at the end of every session. #worldreadaloudday #kidslovenonfiction
Ready for World Read Aloud Day 2023! I’m giving students at 8 schools in 7 states a sneak peek of THE FIRE OF STARS, which is out next Tuesday! @katherineroystudio @chroniclekidsbooks @onceuponatimebkstore @soaring20spb #wrad #worldreadaloudday @litworld
It's a third star for Cecilia! —THREE starred reviews for our book in a row!! ⭐️⭐️⭐️ @sljournal says: “A stellar subject, breathtaking artwork, and unique layout set this biography for young readers apart from the rest.” Thank you so much to Amy Fellows for this perceptive review. One week until our book is out in the world! There’s still time to preorder at https://kirsten-w-larson.com/the-fire-of-stars/ with @onceuponatimebkstore, my local indie, to get a signed, personalized copy along with a 5x7 print, while supplies last. Hooray for another stellar review!
Thanks to the amazing @matthewcwinner for this insightful review!